SIRPAUL is back with a vengeance! We had the privilege of getting an advanced copy of his new album, “The Horse”, and have been playing it nonstop ever since. It is truly a labor of love which seemlessly weaves elements of the music we grew up with while maintaining its modern edge. This idea of reflecting on your past while embracing the present is a philosophy we subscribe to (it’s even in our mission statement). What this all means to you is “The Horse” has something for everyone. We recently had the opportunity to catch up with SIRPAUL, plug his album and find out the details surrounding his controversial album cover. 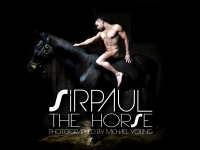 Bop2Pop: Let’s just get this out of the way. You are naked and on a horse on your album cover. That takes some balls. What gives?!
SIRPAUL: HAHAHA!! Well, I have two very good friends who own a horse farm (upstate NY, near Salt Point) and they were kind enough to let me and (the photographer) Michael Young re-interpret a very famous painting calledMazeppa.

Bop2Pop: Well it works really well and it’s a very flattering picture of you (I want those abs!). There’s a sexual energy to it and like the album, suggests you capitulating to its movement. And if you got it- flaunt it.
SIRPAUL: Thank you

Bop2Pop: We at bop2pop are unabashedly in love with electronic and synthpop music from the 1980s. On your new album, “The Horse”, there’s a potpourri of musical influences from that decade. Was this a conscious decision on your part and how has that music influenced your album?
SIRPAUL: Yeah it definitely was a conscious thing, but all of that 80s music is woven so deeply into my subconscious that I probably couldn’t shake it off if I wanted to! I was really inspired by the most random music from that time period: Van Halen “Jump”, The Pointer Sisters, Duran Duran, Madonna and some of the rock bands that were dabbling in disco like The Rolling Stones & Queen as well as some of the more sexually forward artists whose songs caused so much… Rod Stewart “Do Ya Think I’m Sexy?” & George Michael “I Want Your Sex”.

Bop2Pop: You are set to release a video for lead single, “Body Connection”. You’ve tweeted that this video is going to sizzle! Can you tell us about the filming process and give us a hint as to what to expect?.
SIRPAUL: I actually JUST walked in the door from screening the first cut of the video with Director Andreas Anastasis and I immediately approved it…It’s done!!! It’s crazy sexy & suggestive without ever showing any nudity or even one scene of kissing. It was I, guest rapper Loco Ninja, 2 male and 5 female extras. I chose to include the sexiest people I know. We got in a van and drove out to a beautiful beach house in the Hamptons and everyone stripped down into lingerie and underwear and started crawling all over each other. The on-screen chemistry was out of control. The video basically explores the male sexual psyche. It’s about how when men start to get sexually aroused it’s like they are on a runaway train until they climax…but this video never lets the viewer get there. It’s such a tease and that’s what makes it so hot! It’s definitely waaaaaaayyy too hot for TV.

Bop2Pop: A standout track on your new album is “Strict” which explores themes of domination and submission. This is vaguely familar since you explored the same themes on “Tourniquet”, your collaboration with Alex Lauterstein and Simulover. (“Tourniquet” made our top singles list last year). Are we sensing a pattern here?
SIRPAUL: Yeah, it’s kind of a coincidence. I like to sing about sex…I find sex very inspiring. I guess I’m just a very dominant person and I’ve always appreciated when someone is turned on by that. When Alex and I wrote “Tourniquet” for our Simulover album, we wanted to write a song about someone having a latex fetish that actually made having Safe Sex or wearing a condom a fetish in itself. When I was writing “Strict” for my album The Horse, I was exploring the idea of how testosterone turns men into animals and our primal sexual instincts basically take over and you just fall into your role of dominance or submission without really thinking about it…until it’s over.

Bop2Pop: Speaking of Simulover, How is working independently different than collaborating?
SIRPAUL: Oh god, working with Alex has changed me as an artist in so many positive ways. It’s made me grow in my song writing abilities. It’s made me think much harder about my choices as far as chord progressions go, and it’s made me care a lot less about forcing myself to adhere to any self-imposed rules. Alex brings a certain level of sophistication to Simulover and we have so many exciting things happening both collaboratively and independently. (Alex is about to release his first single “Smoking Signals”!!) When I work by myself I am completely obsessive about every detail being exactly the way I envision it sounding. When I work with Alex, I spend most of my time forcing myself to be open to trying new things. It’s very rewarding. We are so excited to be performing at Washington DC Capital Pride this year!! It’s an amazing opportunity for Simulover and we are planning something VERY sexy for our DC boys and girls on June 9th & 10th.

Bop2Pop: Another highlight for us is “Universal Love”. We play it all the time. It’s the perfect track to get ready to go out to. What inspired you to write it?
SIRPAUL: “Universal Love” is about how the LGBTQ community can take the most busted, broken down place and turn it into something beautiful. I’m so sick of our community not getting any credit for all of the positive energy we bring into this world!! Without us your hair, makeup and clothing would suck, your house would be ugly and entire neighborhoods would be run down and never have the opportunity to be resurrected. We as a community love to celebrate life and anyone who has gay friends or family members will more than likely count that person as one of their favorite people in the world, trust. “Universal Love” is about wanting to shake off the drama and stress of everyday life and just say “fuck it… let’s go out dancing & party tonight!!”

Bop2Pop: What do you have in store and how can future and present fans find out more about you?

SIRPAUL: There is soooo much happening in “SIRPAUL World” my head is spinning! My album just came out (like 10 minutes ago), The music video for “Body Connection” is ready to be released soon, I’m heading out to LA on Wednesday to make an appearance on the red carpet at the MTV/Logo NewNowNext Awards, I have The Horse Album Release Party and Concert in NYC on April 14th at Rockbar and I’m starting to tour which will bring my ass everywhere from Huntsville, Alabama all the way to Sitges, Barcelona for the Poptronik Festival on September 1st & 2nd to perform with Bright Light Bright Light, Martika, Monti Montanez (of Menudo!), Lady Joker, Woman E, Adam Tyler & Johnny Lazer!! My theme song from the movie “Going Down in La-La Land” was just released on the Original Motion Picture soundtrack, the movie comes out on April 20th and both “Going Down in La-La Land” and Simulover’s “Tourniquet” will be featured on a compilation called This Beat is…Poptronik Vol. I Hmmmm….what else? Oh! You can find out more on my website http://www.sirpaul.com, you can find me on Facebook at http://www.facebook.com/sirpaulmusic and you can follow me on Twitter @SIRPAUL www.twitter.com/SIRPAUL

Thank you so much for your time. You can definitely count on bop2pop being at Rockbar on April 14 and be sure to pick up the album, “The Horse”, out TODAY on iTunes!