SIRPAUL™ was approached by songwriters Hoyt & Carly Emerick (Synthpop duo Candy Apple Blue) to do a remix of a song they had submitted as the title track for Casper Andreas’ new movie Going Down in La-La Land. Being on a tight schedule of touring & shooting videos, SIRPAUL was certainly up for the challenge . Turning the original country flavored demo (with vocalist Trym Killi) into an electropop confection in 24 hours?? It can be done. SIRPAUL lives in New York City. Anything can be done in 24 hours. And it was…

Fast forward a week. Director Casper Andreas suggested that SIRPAUL become the lead singer on the track. “I was given a ten day window to re-record the song and create an amazing music video with Director Mark Odgers (who directed my video for Objectified) Casper sent us footage from the movie and asked us if we could incorporate it into the video without giving away any crucial elements of the movie. We had to figure out a way to make it look like the movie was part of the story for the song.” The video was shot on location in New York City around Lincoln Center at night. “We almost got arrested a couple of times. At one point we were filming in front of this huge silver bus that was parked outside of Lincoln Center. The security guard watching the bus was getting pissed. We then found out Neil Young was inside getting ready to perform and refused to leave until we were done shooting. He thought we were Paparazzi.” So very LA, wouldn’t you say?

Here’s a clip of SIRPAUL and Mark Odgers on location in NYC while shooting the video:


The music video will be part of the Indie film‘s growing momentum on the film festival circuit, having premieres worldwide before making it’s way back to New York at the end of July for Newfest.

SIRPAUL™ “Going Down in La-La-Land”

The single is now available on iTunes! Download it HERE 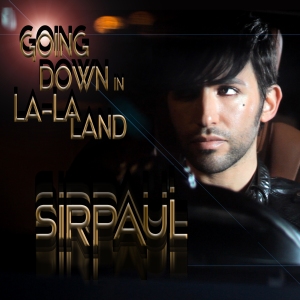